Research at the bottom of the Earth

Sunil Kumar Mor, BVSc & AH, MVSc, PhD, returned to campus in early February from a trip to King George Island, Antarctica, after breaking new ground in molecular research with new collaborators. At the South Pole, he helped perform next-generation sequencing (NGS) on samples of lactic acid bacteria as a part of an interdisciplinary project funded by the Chilean Antarctic Institute (INACH). His contributions to the project were among the first-ever attempts to sequence DNA in near-real time on Antarctica.

NGS helps scientists determine the sequence of DNA molecules in a single experiment. Information revealed by NGS can help scientists track and better understand diseases. Recently, Oxford Nanopore — the UK-based developer of a nanopore DNA sequencing platform — miniaturized NGS technology, enabling scientists to take the process into the field and find answers they seek within mere hours of collecting samples.

In bringing and deploying this new technology at the Chilean base in Antarctica, Mor has opened the door to scientists to perform a wide range of research. His work with the Oxford Nanopore technology was the first successful run of NGS at the Chilean base. Mor also says that the experience allowed him to better consult with Chilean researchers as to which technologies perform the best in such a setting, and what equipment they still need to acquire. This could prove to be especially crucial, he says, at a time when the island’s health and safety are threatened by climate change. (Mor’s trip wrapped up in early February, when temperatures reached 65 degrees Fahrenheit on the continent, the warmest weekend in Antarctica’s history.) 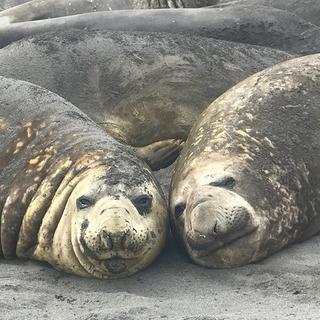 While the larger project to which Mor is contributing began at the University of Concepcion in Bio Bio, Chile, he was brought in to assist them with molecular aspects of the work. The research team sought to use lactic acid bacteria found in Antarctic wildlife for bacteriotherapy applications. The research team collected fecal samples from penguins, seals, birds, fish, water, soil, lichens, and mosses in Antarctica. The southernmost continent has very extreme environmental conditions and limited human interaction, which has led scientists to suspect that the bacteria found in these animals has unique properties to help promote growth. “The animals live in a harsh situation, but in a pristine environment, so it is possible to find good lactic acid bacteria,” Mor explains, “which could be used as probiotics to treat animals and humans, and have other applications elsewhere in different fields.” He says that these specific bacteria could also help advance agricultural outcomes for improving soil quality.

Mor says that sequencing allows his collaborators from the University of Concepcion in Chillan, Chile, and San Sebastian University, in Concepcion, Chile, as well as University of Chile in Santiago, Chile — all of whom have different objectives for using the bacteria  — to characterize different parts of the bacteria present and then break it down into different types. Mor’s findings were relayed to his collaborators, who will each investigate new bacteriotherapy options that this material may bring about.

The value of intercultural collaboration 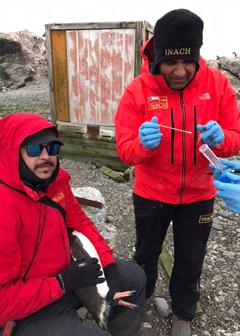 Mor’s enthusiasm for his international collaboration is palpable: “Because of my background in a developing country, I have found it very helpful that the facilities and working environment here at the U of M are really good,” he says. “But there are researchers in different parts of the world that do not have the same access. This project started in Chile, but on the molecular side, I was able to help them. I work with these institutions, do good science and research with them, and apply new technology to help them solve the problems they have.”

An assistant professor at the University of Minnesota College of Veterinary Medicine’s (CVM) Department of Veterinary Population Medicine (VPM), Mor received his bachelors and  in veterinary science (equivalent to a DVM program in the United States) and a master’s in epidemiology from the College of Veterinary Sciences at Lala Lajpat Rai University of Veterinary and Animal Sciences in Hisar, Haryana, India. “This department was responsible for managing outbreaks — collecting samples and conducting an investigation,” he says. “At that point, I was interested in disease investigation and I realized that molecular work was the key for diagnostics.”

From that point on, Mor's focus has remained in molecular diagnostics. He received his PhD from the CVM in 2014, served as a post doctoral and research associate immediately following, and then joined the CVM’s faculty thereafter.

This was a great opportunity to travel to Antarctica, educate researchers on NGS technology, and forge new collaborations.

Mor says he is hoping to help connect more researchers from the CVM with the Chilean base on King George Island. While he was there, he also had the opportunity to connect with researchers from around the globe, including Russia, United Kingdom, and France.

“This was a great opportunity to travel to Antarctica, educate researchers on NGS technology, and forge new collaborations,” Mor says. “I am looking forward to continuing to do so, and to connecting others to do so.”