Going with the flow

The lump on the right side of Wiley’s jaw kept growing. Concerned, his owners brought the 12-year-old Pomeranian to the University of Minnesota Veterinary Medical Center. There, a physical screening, complete blood workup, and testing of lymph node samples revealed a twofold blow.

The results showed the presence of two types of cancer in the small dog’s body: T-zone lymphoma (TZL) of the right jaw and left-rear knee lymph nodes and B-cell lymphoma (BCL) in the node behind the left knee.

The University clinicians were faced with a rare case—concurrent, biologically distinct lymphomas. The dual cancerous manifestations would later raise important questions about how clinicians diagnose, treat, and monitor lymphoma in dogs.

The researcher-clinicians who posed those questions were internist Jennifer Granick, DVM, MS, PhD, DACVIM and clinical pathologist Davis Seelig, DVM, PhD, DACVP, and they published their experience leading Wiley’s course of clinical treatment in June in the Journal of Veterinary Diagnostic Investigation.

To land at their diagnoses, Granick and Seelig forwent conventional histologic techniques common for sussing out lymphomas, favoring instead a combination of fine-needle aspiration (FNA) cytology (extracting samples for microscopic analysis) and flow cytometry, a powerful technology that quickly analyzes cells as they flow past single or multiple lasers in a salt-based solution. 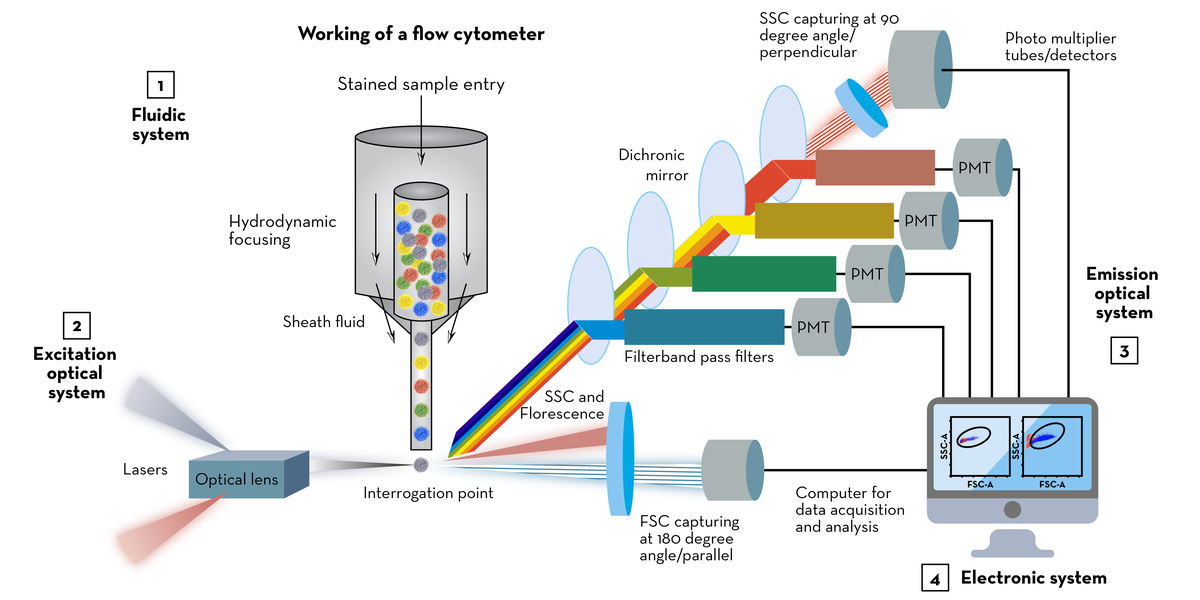 Flow cytometry is easy to use, minimally invasive, increasingly available, and can accurately phenotype cells; as such, the researchers believe it will grow in popularity as a diagnostic tool.

Another thing flow cytometry does well: it finds indolent lymphomas like TZL, as it did in this case.

Had we not used the flow cytometer in Wiley’s diagnosis, we likely would not have found the T-zone lymphoma

“Had we not used the flow cytometer in Wiley’s diagnosis, we likely would not have found the T-zone lymphoma,” Granick says.

Having diagnosed Wiley, the question of treatment was next. A chemotherapy regimen is often not effective in treating canine TZL, but has been highly successful in treating canine BCL. However, as the researchers note in their paper, there isn’t much data on the efficacy of chemotherapy in cases where a dog has both lymphomas at the same time.

Granick, Seelig, and the oncology team at the medical center, including medical oncology resident Hannah Able—along with Wiley’s owners—decided on a course of chemotherapy, which they would monitor via Response Evaluation Criteria in Solid Tumors (RECIST). Those guidelines—used in a majority of clinical trials to evaluate objective response to cancer treatments—look at changes in the size of lymph nodes to determine whether the disease has had complete response, partial response, is progressive, or is stable.

“Determining response to treatment is essential for determining if alternative drugs or changes should be pursued,” Able says. “If lymph nodes were enlarged because of the BCL, this would indicate drug resistance and recommendation of a treatment change; however, if enlargement was due to TZL with resolution of the cancerous B cells, current treatment is working, as the more aggressive lymphoma type is being controlled.”

After two months of treatment, Wiley’s mandibular lymph node was little changed, and RECIST measurements indicated it was a stable disease. Further FNA cytology and flow cytometry testing confirmed the TZL disease was stagnant in the tumor.

The lymph node behind the left knee told a conflicting story. Based on its measurements, RECIST categorized the lymph node as having complete response to treatment. Indeed, repeat flow cytometry confirmed a significant decrease in cancerous B cells. But the testing also showed a marked increase in cancerous T cells. Had the clinical team relied solely on RECIST criteria, this new manifestation would likely have been missed.

Wrote the authors of that finding: “This disagreement highlights the shortcomings of the RECIST criteria in monitoring patients with combined chemosensitive and chemoresistant forms of lymphoma—and illustrates the need for additional monitoring modalities to assess patient response to treatment more accurately.”

That the team was thorough—using flow cytometry as a backstop, rather than relying solely on the RECIST criteria to monitor the lymphomas—won them a big fan.

It gave us more time with him. There was time in there where he was his normal self, and I was grateful for that.

“It gave us more time with him,” says Judy Laituri, Wiley’s owner-mom. “There was time in there where he was his normal self, and I was grateful for that.”

Granick’s and Seelig’s belief that flow cytometry is part of the next frontier in canine oncological diagnosis has prompted them to put their money where their proverbial mouths are. Until recently, University clinicians had sent lymphomas for flow cytometry testing to Colorado State University, with whom the researchers worked to validate methods prior to CSU accepting the samples. It was a process.

In 2018, the duo created the Diagnostic Flow Cytometry Service—based at the VMC—for use at the VMC and Twin Cities-area veterinary clinics. This allows Granick, Seelig, and other researchers at the College of Veterinary Medicine to conduct the research in-house, and it enhances the College’s diagnostic and monitoring capabilities.

For Granick and Seelig, localizing the diagnostic service was an important step in staying ahead of the curve.

That a diagnosis of tandem lymphoma malignancies has historically been rare is less likely because they don’t exist in canines, and more likely because diagnostic methods haven’t been great at ferreting them out. The more commonplace flow cytometry becomes, the more common these diagnoses might become.

As new diagnostic tests improve the ability to detect smaller amounts of cancer, we have opportunities to improve treatment and outcomes for pets with cancer—which of course is the entire animal healthcare team’s goal

And that means not only that clinicians need to be nimble in treatment decisions, but that treatment efficacy guidelines like RECIST might, in certain cases, need a rethink.

“As new diagnostic tests improve the ability to detect smaller amounts of cancer, we have opportunities to improve treatment and outcomes for pets with cancer—which of course is the entire animal healthcare team’s goal,” Able says. “It is such an exciting opportunity, and requires constant changes to determine the best ways to use new diagnostics to monitor disease and guide treatment.”

Wiley died 18 months after his initial diagnosis. But his contribution to science will—at the very least—prompt researchers and clinicians to think more critically about what methods they use to diagnose, treat, and monitor one of the most common cancers in our canine best friends.