Layla and Iris were sisters before they were friends. In 2014, the two Doberman pinscher pups were adopted from the same litter. Iris went home with Molly McCue, DVM, MS, PhD, DACVIM associate dean for research at the University of Minnesota College of Veterinary Medicine (CVM), where Iris formed a special bond with McCue’s son and could detect when he was on the verge of having a seizure. Layla found a home with Sam Beeson, a student in the CVM’s dual DVM/PhD program who works in the McCue Lab focusing on the genetic basis of disease in animals.

Together, Layla and Iris lost their puppy teeth and grew into their paws. Now, they’re inspiring research that will save other dogs’ lives. 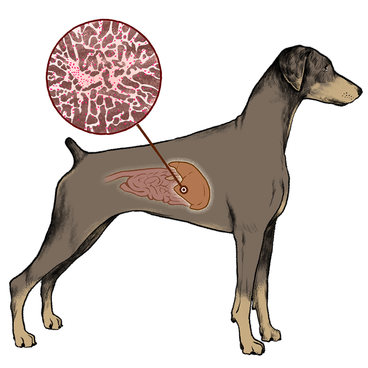 Beeson noticed Layla was feeling off in late spring of 2019. She abruptly became pickier about her food, which had not been a problem previously. Beeson took Layla to the UMN Veterinary Medical Center (VMC), bloodwork detected abnormal liver enzymes in the 5-year-old Doberman.

Doberman pinschers are among several dog breeds predisposed to copper-associated hepatopathy, the leading cause of hepatitis in dogs. The disease is caused by a build-up of copper in the liver––the nutrient is both naturally produced inside the body and added to dog food to prevent deficiency. It’s essential for health, but some breeds either absorb too much copper from their diet or can’t flush the mineral from their systems. This accumulation can lead to chronic hepatitis and, eventually, cirrhosis and liver failure.

“Because it’s liver disease, patients don’t usually show signs until they are in advanced stages,” Beeson says. “It’s something you can catch in routine blood work, but most people don’t opt for that if their dog appears healthy.”

Eva Furrow, VMD, PhD, DACVIM, an associate professor in the CVM’s Department of Veterinary Clinical Sciences, and Julie Churchill, DVM, PhD, DACVN, helped Beeson navigate Layla’s diagnosis. She ate special food without added copper and was put on immunosuppressants. Layla was in the late stages of the disease, but Iris hadn’t shown any signs. Still, Beeson knew it was likely hereditary. She told McCue, who had Iris’ liver tested, too.

“There’s a tipping point. The dogs can live with the disease until they start to lose liver function to inflammation,” says McCue. Iris’ results showed that her liver was abnormal and was starting to become inflamed, but she wasn’t in crisis yet. McCue put Iris on a special diet and medication that flushed copper from her system. After two years of treatment, Iris’ labs were normal.

“Layla was very sick by the time she got diagnosed, but we were able to prevent Iris from dying of the same disease because we caught it early in her,” Beeson says.

Testing before the tide turns

“We believe this is a complex genetic trait controlled by many genes and environmental factors. The alleles driving risks are likely many, and not yet identified,” McCue says.

Currently, the team is working with a local Doberman pinscher rescue that connects the researchers with owners whose pets have been diagnosed with the disease. During the next phase, the scientists will analyze samples from these dogs, as well as healthy senior Doberman pinschers who undergo routine blood work as part of their care. Layla’s and Iris’ data can be found among the samples, leaving a lasting legacy on the scientists’ search for a cure.

“Our motivation is to get more information. We don’t know a whole lot about the genetics of this disease in Dobermans, and the research we have now is inconclusive,” Beeson says. In addition, some of the alleles that have been diagnosed in European lines of Doberman pinschers don’t translate to American lines of the breed, which are the focus of this new research.

A head start on hepatitis

Ultimately, the researchers hope to identify the gene variants involved and develop a test that would detect risk early on, when the disease can still be avoided through something as simple as changing a dog’s diet and routine blood work. Managing the risk is key since, although some genetic risk factors can be eliminated through breeding, this will likely not be the case with copper-associated hepatopathy.

“Because copper-associated hepatopathy is complex and likely informed by many genes, we likely can’t breed it out,” McCue says. “But if we can identify dogs who are at risk early on, we can change their risk.”

This research is so much more than a job, It’s connected not just to our love for animals, but to our pets. It's a tale of two sisters inspiring science.

This forthcoming research holds great promise for introducing novel care strategies that would enable veterinarians to help Doberman patients skirt hepatitis. And while the catalyst for the project was devastating, a silver lining might just be that the innovative minds behind the solution have a lived, personal passion tied to its outcome. “This research is so much more than a job,” McCue says. “It’s connected not just to our love for animals, but to our pets. It's a tale of two sisters inspiring science.”