Environmental issues are very important to Eva Reinicke who grew up on an organic farm in upstate New York. That’s why she studied environmental education as an undergrad and, more recently, became a honey bee veterinarian.

The Western honey bee is a species of bee that is non-native to the United States and crossed the Atlantic with the colonists. Beekeeping predates the birth of the United States and has become increasingly crucial to the human diet. Today, the agricultural industry relies heavily on migratory pollination—the practice of beekeepers bringing their colonies to a farm to pollinate a crop.

Some fruits, such as blueberries and cherries, are 90-percent dependent on honey bee pollination at bloom time. And almonds depend entirely on the honey bee for pollination—1.8 million colonies, roughly two-thirds of the total U.S. colony population, travel to pollinate almond orchards each year. Honey bees contribute $20 billion to the U.S. crop growing economy.

We humans need the European honey bee population to be healthy and productive in order to eat many of the foods that act as staples in our diet. However, colonies can face various parasitic, fungal, and bacterial infections that veterinarians can help beekeepers manage, prevent, or treat. 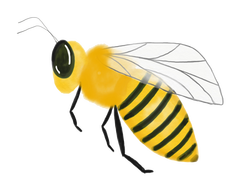 Reinicke, ’16 DVM, says the University of Minnesota Bee Lab has been a vital resource for her to build trust with beekeepers and access information since she began working with bees in her veterinary practice, Northland Honeybee Veterinary Service, in 2017. “Researchers and PhDs in the field are essential for veterinarians to work with,” she says. Honey bee clients are migratory, though, and bees are not as active in the winter months, so Reinicke’s honey bee practice supplements her day job as an equine vet.

Reinicke recently came to the University of Minnesota Twin Cities campus in St. Paul to give a presentation to current students at the University of Minnesota College of Veterinary Medicine. “I think there are good opportunities for new DVM graduates to work in honey bee veterinary medicine,” she says. “It’s going to be an area, though, where they are going to be forging their own way. They will have a steep learning curve and it may be a challenge, but if they are up for it, it’s an important area of veterinary medicine and a very rewarding experience.”

Reinicke’s clients are a mix of the three main types of beekeepers: commercial beekeepers (500+ colonies), sideliners (200+ colonies), and hobby beekeepers (<200 colonies). Hobby beekeepers typically keep a few colonies to pollinate their own gardens or improve local ecosystems. Sideliners might travel some with their colonies to pollinate a nearby farmer’s crop, but are not running quite as big or expensive of an operation as commercial beekeepers, who travel across the country to help major agricultural outfits pollinate.

Reinicke’s busiest honey bee veterinary season starts in mid-April and runs through mid-August. Weather conditions can greatly impact bee health as cold, rainy springs prevent opportunities for bees to fly to flowers. Rain can also wash nectar and pollen away. At the same time, droughts impact bee nutrition because they cause flowers to produce less nectar. Colonies with inadequate nutrition can have weaker immune systems and develop health problems.

As with most species today, honey bees also face antimicrobial resistance as a major threat to their health, especially insofar as American Foul Brood—a fatal bacterial disease caused by a spore forming bacterium that infects honey bee brood—is concerned. Having honey bee veterinarians involved with the distribution and acquisition of antibiotics is one potential solution to improving the health of our vital European honey bee population. 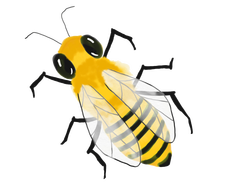 Reinicke is quick to point out, however, that the fact that farmers are having to rely so heavily on commercial beekeepers to have access to pollination says something about our ecosystems. “If farmers could rely more on healthy ecosystems and native pollinators, with some contributions from honey bees, that would reflect a much more robust system,” she says. “But we have gotten to the point in our agricultural systems where the only way to set large crops of nuts or fruits is to just inundate those areas with a lot of beehives. If we had healthier ecosystems, our farmers would need fewer beehives and could rely on more natural local pollinators to do that pollination.”

According to Reinicke, a big topic in the almond grove farming industry right now is creating additional sources of pollen (other than almond plants) for the bees pollinating there. “For years, commercial beekeepers have been setting the beehives in the middle of acres and acres of almond grove and the bees don’t have other pollen sources,” she says. “But now they are starting to grow flowers and hedges for the bees to eat so their nutritional source is more diverse and their colonies are healthier coming out to pollinate those huge areas.” A honey bee veterinarian can observe and suggest solutions like this to clients as problems arise.

While the agricultural industry is making small strides in advancing bee health, Reinicke remains steadfast in her push for more. “In some respects, honey bees—and pollinators in general—are sentinel species in terms of what is going on with our ecosystems. We need to find solutions to create healthier ecosystems.”