The fight for Minnesota's moose

As the largest wild animals in Minnesota, moose have become emblematic of the state. Minnesota is among the few states in the country that play host to moose. And while the moose population in Minnesota has been in a steady state of decline since 2009, it has recently plateaued.

University of Minnesota College of Veterinary Medicine (CVM) Department of Veterinary Population Medicine (VPM) Assistant Professor Tiffany Wolf, DVM, PhD, is collaborating with Seth Moore, PhD, director of biology and environment at the Grand Portage Band of Lake Superior Chippewa, and other researchers to analyze obstacles keeping moose from thriving and identify solutions to promote their well-being. Right now, Wolf and her collaborators are deciphering whether predation from wolves or parasite exposure—specifically to brainworm—is the number one threat to Minnesota’s moose population.

The largest member of the deer family, moose have been essential to the landscape in and around Minnesota for centuries. “Moose are the primary large prey species of a boreal ecosystem and are an indicator of ecosystem health,” says Moore. Moose were also once the primary subsistence species to the Grand Portage Band. “But harvests have declined in recent years following declines in Minnesota’s moose populations,” he says.

Moose are the primary large prey species of a boreal ecosystem and are an indicator of ecosystem health.

Working with a Native American tribe on a culturally important species in hopes of solving the problems associated with that species’ decline is Wolf ’s favorite part of this work. “The longterm perspective and idea of us being stewards and partners with nature drives the natural resource management of the Tribe, and that approach aligns well with ecosystem health, where we have a more holistic view that you cannot solve health issues of humans or animals in isolation of each other or the environment,” says Wolf. “This shared perspective makes it easy for us to work together.”

And Moore says that because moose are a culturally vital species to the Grand Portage Band, researching moose health and sustainability with an intention to improve management is critical to reversing the declining trend. “We hope to learn how and where brainworm transmission occurs on the landscape so that we can manage habitats to reduce that risk." 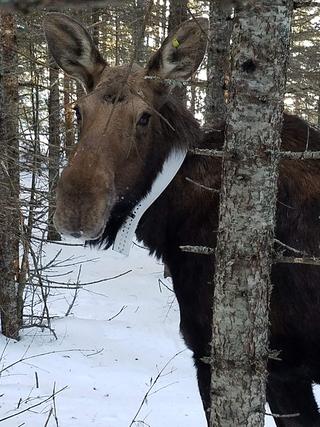 “If we don’t try to do something about brainworm, it will always plague the population,” says Wolf. “The Minnesota population was taking a plunge, and now it seems to be plateauing a little bit at a lower level, which is good because it buys us more time to determine if we can find solutions.”

Brainworm is spreading to moose in northern Minnesota through the increased population of white-tailed deer in the region. Less severe winters and shallower snow depths lead to higher deer survival rates and an increasing deer population trend. Deer shed the parasite’s larvae in their pellets. The larvae then mature in an intermediate host—one of several species of terrestrial snails and slugs—before becoming infectious to moose and other ungulates. Moose ingest infected snails when they browse vegetation. The matured larvae then migrate to meningeal tissue, which surrounds the moose’s brains and nervous systems. Rather than remaining there, as they do in deer, the matured larvae tunnel through moose brain and spinal tissue. While brainworm does not affect the white-tailed deer population, the result for infected moose is neurological disease and often death.

At present, few options for mitigating the spread of brainworm exist other than controlling white-tailed deer populations, which is an unpopular approach among many. With new funding from the Environment and Natural Resources Trust Fund, Wolf, Moore, and their collaborators are working to better understand how transmission is occurring across the landscape in northern Minnesota. The Legislative-Citizen Commission on Minnesota Resources recommended this work for funding from the Minnesota Legislature, which recently awarded roughly $400,000 over the course of three years (from 2020 to 2022) to the project.

Researchers have been studying brainworm for a long time, but mortality studies Wolf, Moore, and collaborators have done alongside the Minnesota Department of Natural Resources over the past several years have brought to light an urgent need for solutions.

Supporting the preservation of Minnesota's moose

Right now, the researchers are well funded to accomplish their more immediate goals, but given this new partnership with Isle Royale, they are on the cusp of identifying new priorities and approaches to tackling those priorities. Crowdfunding has acted as a very helpful buffer for funding gaps as these researchers embark on new aspects of this work.

Consider giving to this crowdfunding campaign today at: crowdfund.umn.edu/moose.

This new project will employ novel approaches to understanding transmission, in order to identify other strategies for mitigation. The researchers hope to utilize genetic information from the parasite (recovered from deer feces) and slugs and snails (recovered from moose feces), as well as movement data from deer and moose, to identify vulnerabilities in transmission that might reveal new solutions. “The transmission of this parasite requires a third host—snails and slugs—which is certainly a complex pathway,” Wolf says, “and there are a lot of gaps in our knowledge about where and when transmission to moose occurs. But, thanks to this support, we have an opportunity to close some of those gaps.”

The researchers will use spatial analysis to pinpoint areas of habitat where moose and deer overlap—and where they don’t. They will then identify specific landscape and climate characteristics of those spaces to create a risk map of where brainworm is most likely to be transmitted.

Lastly, the scientists will analyze the parasite’s genetics to look for patterns of transmission across the landscape. They will collect fecal samples from deer across their range in Grand Portage, where a high density of deer are currently being studied. By assessing brainworm population genetics, the scientists can describe gene flow of the parasite and identify, and eventually leverage, natural landscape barriers that impact transmission.

Early support through crowdfunding and the Van Sloun Foundation facilitated the development of tests these researchers used on genetic material recovered directly from fecal samples. These tests will be used again in this project, allowing the researchers to genetically profile the parasite and detect snail and slug DNA in feces.

“This is an amazingly unique opportunity,” Wolf says. “It is not often that you get to study populations in the same region that aren’t experiencing the same ecological pressures. The ecology behind the decline of our Minnesota moose population is complex. Isle Royale is a simplified version of the same ecosystem. It’s a natural experiment that a scientist doesn’t come by frequently.”

The team collared 20 moose on Isle Royale and 15 additional moose in Grand Portage last winter. “We are constantly gathering data on them about their movement and habitat use across the seasons, and, as they die, we are looking at what causes their  mortality,” Wolf says. This information is being assessed alongside observations made of the growing wolf population in Isle Royale.

While wolves have long been identified as a top cause of mortality for moose across the mainland, Wolf, Moore, and their teammates have a hunch wolves might actually be accelerating a preexisting process of removing moose by consuming animals that are already unhealthy. “They might be masking a bigger issue behind adult moose mortality and our population’s decline,” says Wolf. 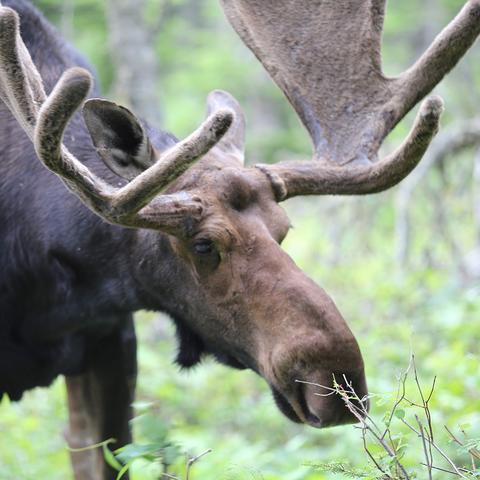 Five years of data (collected and analyzed by these same collaborators from 2013–18) reflect that brainworm is associated with approximately 25 percent of collared moose mortalities. By comparing the two populations, the researchers hope to determine if brainworm is, in fact, the top threat.

The need to understand the dynamics of both the Isle Royale and Grand Portage ecosystems are critical to the Grand Portage Band, as both places have such value to the tribe. “Sometimes people have a perception that if you are hunting a species, it is contrary to the restoration of that species and the health of a population,” Moore says. But in their years of research, Moore and Wolf have not found that the tribal members' subsistence hunt of moose contributes to the species' population issues. In addition, Grand Portage has invested $5–6 million to help restore the population and provide land management. “We are probably investing more heavily than anybody in restoring this species,” Moore says.

Moore is excited to have the opportunity to partner with the National Park Service, U of M, and other academic institutions to study the two ecosystems and help to manage moose restoration on Grand Portage and adjacent Minnesota lands.

“My veterinary expertise and the needs for animal welfare associated with capture are what got me involved with researching moose in Minnesota,” says Wolf, who was previously a veterinarian at the Minnesota Zoo. “The opportunity to do applied research and potentially make a difference in the trajectory of this population is what has inspired me to stay involved and help lead some of these research efforts here in Minnesota.”

The opportunity to do applied research and potentially make a difference in the trajectory of this population is what has inspired me to stay involved and help lead some of these research efforts here in Minnesota.

As the researchers continue their fierce race against the clock on helping the moose population in Minnesota and beyond, their multidisciplinary backgrounds serve as a lifeline to the work. “We can combine our different scientific interests to answer more interesting and complex questions than the ones we can answer doing this work in isolation.”

And for moose on the mainland, the scientific advances made by these researchers act as an essential line of defense in identifying and combating a major threat to the species’ health—brainworm’s infiltration of Minnesota’s northland.