On her last day at the University of Minnesota College of Veterinary Medicine (CVM), Flirt made one final, notorious bolt into the pasture outside of Leatherdale Equine Center. The American Quarter Horse was a well-known escape artist who always seemed to thrive when watching her handlers scramble after her. Still, it was impossible for Flirt’s caretakers to watch her stir the pot without a smile smeared across their faces. Those who knew her agree: Flirt threw her full force behind everything she did, even in her declining years. 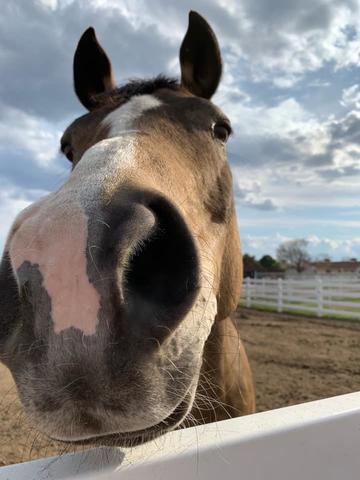 Flirt was also known for destroying things like the lid on a water container or causing any other variety of mischief.

“Of the horses in the teaching herd, Flirt was first in your face whenever you’d go out to the pasture,” says Sue Loly, LVT, VTS-EVN, a technician and barn manager at Leatherdale Equine Center, who cared for Flirt for 14 years. “She really was such a flirt and always in everybody’s business.”

Flirt’s tenure as a research horse at the CVM ended last fall, after her arthritis overtook her quality of life and her care team made the decision to humanely euthanize her—but not before one last glorious romp in the pasture.

“Flirt was the kind of horse who hated being in a stall,” says Associate Dean for Research Molly McCue, DVM, MS, PhD, DACVIM, who spent years conducting much of the research that relied on Flirt. “But having Flirt live outside became unsafe as her arthritis progressed. She had trouble navigating ice and snow.”

The limitations Flirt's joints put on her life eventually stripped her of the reckless abandon she so clearly loved. And those who cherished her felt it was a disservice to who Flirt was to keep her locked in that lifestyle for too long. “She was a favorite, especially among people who didn’t have to make her do something she didn’t want to do,” Loly adds with a laugh. “She was 1,300 pounds and when she would decide to do or not do something, that was it.”

Perhaps one of the best-looking troublemakers in the CVM’s history, Flirt’s creamy, caramel coat was accentuated by knee-high black “socks.” And down the nose she stuck everywhere and anywhere ran a thick white strip, which ended above her pink and black splotched muzzle. It’s a good thing the rabble-rouser was so endearing, or else she may not have won over as many hearts as she did over her decades-long career as a research horse at Leatherdale.

Of the horses in the teaching herd, Flirt was first in your face whenever you’d go out to the pasture. She really was such a flirt and always in everybody’s business. 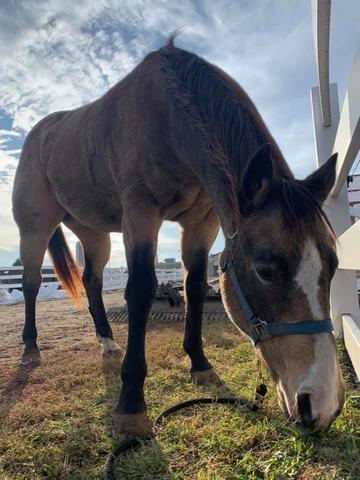 Flirt came to the CVM because she had polysaccharide storage myopathy (PSSM), a metabolic disorder that causes muscle damage in horses. Flirt's donor wanted her to contribute to finding answers for all the horses struggling with PSSM. Throughout her life, Flirt participated in nine studies on PSSM, but Flirt’s research contributions have a wider reach into various areas of equine health and extending beyond her life itself.

Loly says most people have misconceptions about the lives of research animals. “Our research horses live here for most of their lives and have been loved and cried into,” Loly says. “I’m sure there are stories we won’t ever even know about people getting through life and working here by going to see Flirt and the herd. It’s good for people to know their lives are not at all bad—they're pretty darn good!”

It’s fitting, then, that perhaps Flirt’s greatest contribution was to a genetic test for PSSM, which plagues Quarter Horses and draft horses from continental Europe. “They develop excessive glycogen and an abnormal polysaccharide in their muscle fibers,” explains James Mickelson, MS, PhD, a professor in the Department of Veterinary and Biomedical Sciences at the CVM, who worked on the bulk of studies Flirt participated in. “PSSM messes with a horse’s metabolism and causes them to have painful contractions during exercise. It often leaves horses stiff and painful.”

Around the time of Flirt’s arrival at the College, McCue was an eager graduate student working with Mickelson and other CVM researchers. For her PhD thesis, McCue identified the genetic mutation that causes PSSM in horses—a novel finding at the time that led the American Quarter Horse Association to require testing for the mutation in order to register stallions.

The researchers on McCue's project used blood samples from Flirt and assessed her DNA, monitored her exercise on a treadmill, and measured Flirt's muscle enzymes to see how different diet and exercise regimens impacted her PSSM. McCue and her collaborators (including Mickelson and former CVM Professor Stephanie Valberg, DVM, PhD, DACVIM, ACVSMR) were ultimately able to patent a genetic test for the disorder. Since then, countless horses have been genotyped for the mutation. Thanks to Flirt and the CVM research team, PSSM can no longer fly below the radar, and breeders can make informed decisions to help horses side-step the disorder.

I’m sure there are stories we won’t ever even know about people getting through life and working here by going to see Flirt and the herd. It’s good for people to know their lives are not at all bad — they're pretty darn good!

Flirt also lent cardiac data to ongoing research into atrial fibrillation at the College, led by Sian Durward-Akhurst, DVM, PhD, a postdoc in McCue’s lab. Although, Loly says, in classic Flirt fashion, she managed to destroy at least one heart monitor — by smashing it up against a wall — in the process.

Flirt was also part of three research projects led by students pursuing their master’s degrees at the CVM. One study, led by Erica Dobbs, DVM, set out to advance scientific knowledge about the gait analysis systems available to equine clinicians, examining the systems’ usefulness in a herd with musculoskeletal disease, which included Flirt. For this study, Flirt underwent a brief lameness exam at a walk.

Another project, led by Dane Tatarniuk, DVM, MS, DACVS-LA, explored what happened to Interleukin-1 Receptor Antagonist Protein (IRAP), a prominent anti-inflammatory treatment for joint disease in horses, when it was processed (frozen and thawed). The study also assessed how joints with osteoarthritis reacted to IRAP administration. Flirt was given a series of IRAP injections into her coffin joint in her hoof and then underwent some blood and joint fluid draws to assess the process' efficacy. She also received traditional lameness exams performed every week for a month.

Flirt trained to use the water treadmill, so she was also able to add to a study, led by Jose Mendez, MS, DVM, investigating the effect of rehabilitation exercises over conventional footing as well as in a water treadmill. The project aimed to define what techniques would provide the greatest range of motion to the joints in the lower limb. Mendez measured Flirt's motion while she walked in the treadmill at three different water levels, as well as walking on different surfaces in the arena.

Of course, each of these efforts involved plenty of thank you pets and treats for Flirt. She could not have known it, but her impact on equine research has helped—and will continue to help—horses from head to toe.

Flirt was also a teacher in her own right. Multiple fourth-year veterinary students in the Equine Lameness and Podiatry rotation and the Equine Sports Medicine rotation have benefited from learning with Flirt over the years.

I loved her because she was smart, but also ornery. Flirt liked things her way, and she had us well trained.

While Flirt’s contributions to science have helped countless horses and researchers, stronger still was the bond Flirt managed to form with the researchers themselves. “I loved her because she was smart, but also ornery,” McCue says. “Flirt liked things her way, and she had us well trained.”

McCue recalls a photoshoot of a graduate student she was advising for an article in 2018. The student was posing with another horse at Leatherdale while Flirt was tied behind them in the barn aisle. “Apparently, she felt she should be the model because she was making all kinds of ruckus,” McCue says. When the photos came back from the shoot, half of them featured Flirt flipping her head and making faces in the background.

A similar story could be told for many other research horses that have played important roles in CVM research, but of the horses in the teaching and research herd, Flirt was at the College the longest, involved in the most studies, and had the biggest personality. And she made a point to remain a force of nature all the way up until the end. "She had a heart of gold," Loly says, "and she went out in lots of glory—blazing, fiery glory.”

If you are interested in supporting research projects that benefit horses in Minnesota and beyond, consider giving today!

You can also contact Mindy Means, development officer at the College of Veterinary Medicine, at mkmeans@umn.edu or 612-626-5482.